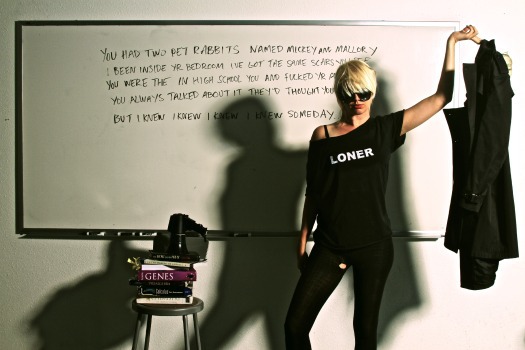 Erika M. Anderson was formerly known by few as the frontwoman of Gowns, the Californian drone folk band that disbanded after the release of a remarkable album and a string of legendary live shows.

This year, however, her name caused a sensation in all major international musical media and found a distinctive position next to the names of PJ Harvey, Cat Power and Kim Gordon.

Through the release of her first solo album ‘Past Life Martyred Saints’, Erika leaves aside the unsettled bliss of older times and pays tribute on the raw lyricism of scarring relationships and the experimental noise scene that stretches from the ominous graveyards of South Dakota to the outskirts of Seattle. She composes a thrilling collage of built-up sound and simple everyday standards that juggles between her 6ft tall figure and her deep distinctive voice. Her Viking ancestor, Eric-Blood Axe can only comply with the burning lyrics “I’m 22 and I don’t mind dying. “, cleverly borrowed from the epic song “Who Do You Love”.

EMA is coming to Athens for the first time to present her explosive live show along with three members of her band and the swagger of riot grrrls in her pocket.

The concert will open with Monovine, the tight-knit prolific band from Patras that this year released their first album “CLICHÉ” through Inner Ear Records. They masterfully lead harmony to noisy cognitive paths through their pious grunge riffs and compose an orgiastic rock history that tackles the space between the birth and death of… sound.
The concert will take place on the outer room of Bios that has a capacity of up to 350 people.